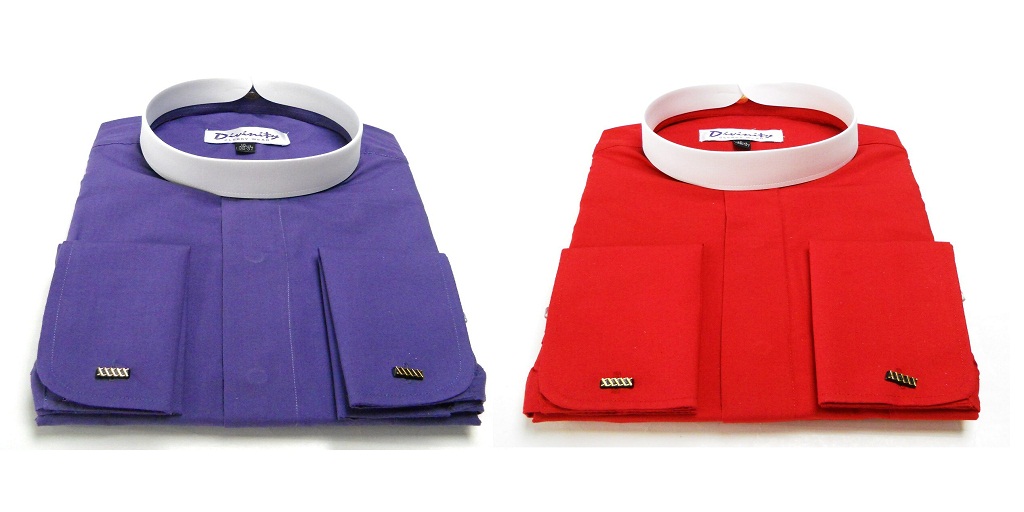 A clerical collar, also known as a clergy collar, is a rigid white collar, typically made of cotton or linen (although there are modern alternatives) that fastens about the neck, closing at the back. Typically, it shows through the rest of a priest’s vestments as a small, white square at the front of the throat, although depending on the priest’s habit, the entire collar might be visible.

You probably associate these collars with the clergy already, but who exactly wears them, and why? Let’s knock out some of the most common questions.

What Is a Clerical Collar Called?
First off, clerical collars, A.K.A. clergy collars, go by a lot of names. They may also be referred to as Roman collars or dog collars in addition to clergy collars, but should not be confused with the collarino, collaret, or preaching bands that are sometimes associated with them.

Who Wears Clergy Collars?
Just who wears a clergy collar will depend on the church, but regardless, wearing a clerical collar is associated with ordained members of the clergy.

It is believed that clergy collars as they are now recognizable were first worn by members of the Anglican clergy starting in the early to mid-1800s. From there, the practice of wearing a discernable white clergy collar spread to other sects and denominations.

What Do Clerical Collars Symbolize?
Outwardly, clerical collars are a symbol of a person’s commitment to religious life. These seemingly innocuous white bands are a near-universal symbol that the person wearing one is a member of the clergy. Like a cross, the clerical collar transcends denomination.

Is There More than One Type of Clergy Collar?
There are two main types of clerical collars, banded collars, and tab collars. Banded clerical collars fully encircle the neck and are visible above the other vestments or garments. A tab collar only shows through as a white square at the throat.

A Reverend by the name of Donald McLeod is believed to have invented a detachable collar early in the 20th century, but whatever the case, there are plenty of detachable collars available to modern clergymen and women. Some of them aren’t even full collars, but little plastic tabs that can easily be removed from the collar for easy cleaning.

Where Can You Buy Clerical Collars and Clergy Shirts?
Looking for a clerical shirt, a clergy collar shirt, or just a removable collar to go with a black shirt might seem daunting, as these are fairly arcane products. Not, however, if you know where to shop.

Visit Divinity Clergy Wear online at DivinityClergyWear.com for a full line of clerical collars and clergy shirts, in a wide range of sizes, colors, configurations, and designs. Check out their website, and give them a call at 877-453-3535 or visit them in their showroom in Hamilton, New Jersey if you have any questions!