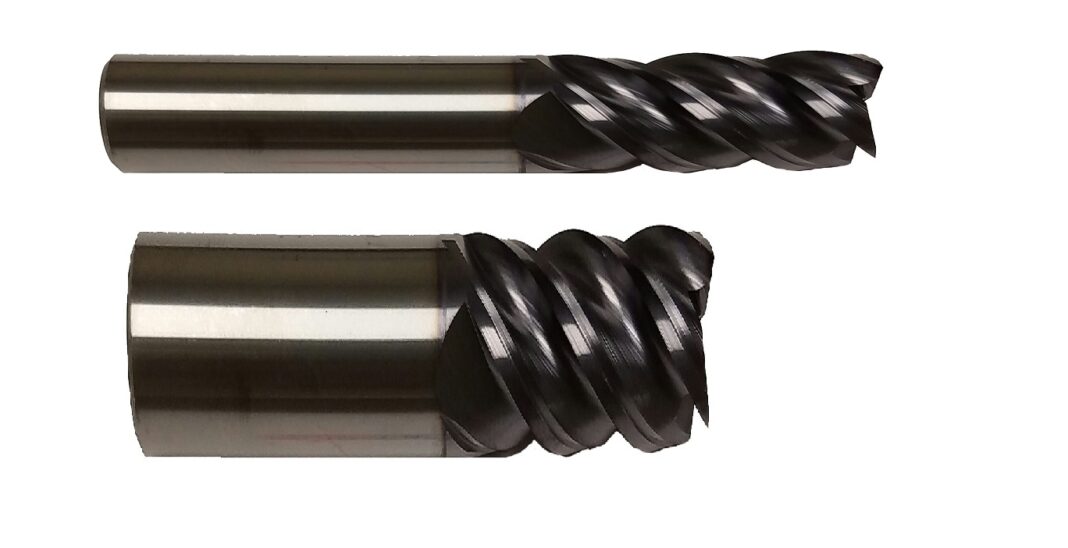 Milling cutters are extremely hard working tools but they are not without their drawbacks. When operating at high rotational speeds, end mills have a tendency to vibrate. This cannot be avoided, but certain types of tools like variable helix and variable flute end mills are designed to minimize internal vibrations. This can have several advantages for machine operators and on the quality of finished products.

The Vibration Issue
Tool vibrations can cause some serious headaches and we mean that literally. When tools vibrate, the cutting edge is continually being pushed against the workpiece with more pressure than is intended. These tiny impacts result in tool chatter, a loud screeching sound that can be extremely irritating. Another side effect of tool chatter is a slight pattern that is left on the surface of a workpiece.

Chatter occurs for a few reasons. When any tool spins, it will wobble slightly even if our eyes cannot perceive it. In addition to natural rotation oscillations, tools are also operating at constant speeds with equal spaced cutting surfaces. This means that the cutting edges are striking the workpiece at even intervals. This even application of forces builds up the internal vibrations like keeping a pendulum swinging by applying consistent force at the apex of its swing.

The conventional method of dealing with chatter is to operate at lower speeds and feeds. While this can certaining cut down on the auditory effects of chatter, it does not address the issue of tool stability. Slowing down also increases production time, which can hurt your bottom line if speed is key in your machine shop.

Variable End Mills
One easy way to resolve tool chatter without sacrificing production time is to exchange your end mill for a variable cutter. Variable tools come in two forms, variable helix and variable flute end mills. Both of these designs help to reduce tool vibrations by utilizing an asymmetrical design. In variable tools the spacing of the flutes or the angle of those flutes will differ between every flute.

To go back to the pendulum example that we gave earlier, the equal and even application of force is what keeps the pendulum swinging in a consistent arc. If you apply force at different points in its swing or apply a different level of force, the pendulum’s arc will change. That is the basis behind how variable end mills reduce tool chatter. The inconsistent application of force on the flutes of the tools cause them to not build up the consistent internal vibration that leads to tool chatter.

Now you might be wondering how stable an asymmetrical tool can be. Obviously your average four flute end mill has 90 degree space between the cutting edges in order to equally distribute the force of the cuts. If you made a four flute tool with extremely different spacing like 100, 120, 80, and 60 degrees, then you might have a problem where the uneven force on the cutting edges can damage the tool. Luckily variable end mills are designed to only have a slight asymmetry. Just enough to lower tool chatter but not enough to damage the tool with the application of uneven force.

If you are interested in finding variable helix or variable flute end mills, it is important to find tools from reliable manufacturers. Online Carbide is an American end mill and drill bit manufacturer specializing in solid carbide tools. They offer a great selection of variable helix end mills that are designed to run smoothly and reduce chatter. You can see their entire inventory of tools when you visit www.onlinecarbide.com.

Those with dry skin types often seek to manage their skin by going through bottle after bottle, jar after jar of moisturizers from different...
Read more
Business

Luxury homes are a huge investment, not just monetarily but they demand a significant amount of effort too. Although pre-built homes are quick to move...
Read more