Where to Get a Quality Steve Yzerman Jersey 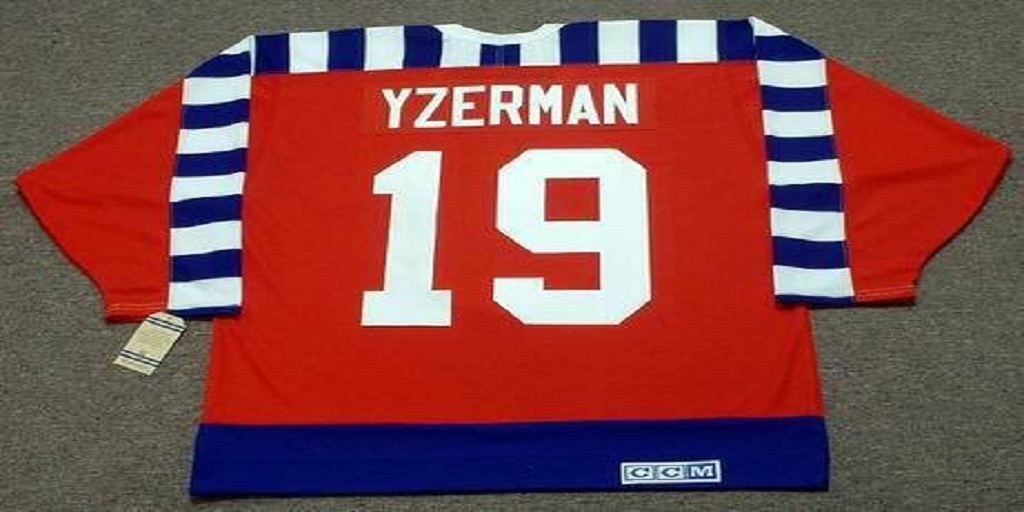 If you are talking about the history of the Detroit Red Wings, you wouldn’t be able to make it more than three sentences before mentioning Steve Yzerman. He is a Detroit sports legend, but he was also beloved by NHL fans around the world. His stats and awards are unmatched for a Red Wings player.

Whether you know him as the player and captain of the Red Wings, the GM for the Tampa Bay Lightning, or the executive director for Canada’s Olympic team, you can celebrate the amazing hockey career with a Steve Yzerman jersey.

NHL Debut
Steve Yzerman was drafted by the Detroit Red Wings in 1983. He was drafted directly after the legend Pat Lafontaine. Because of the huge prospect that LaFontaine was, not much was expected of Yzerman, but he proved to many that he deserved to be respected. His rookie year he gained the attention of fans, players, and coaches around the league. He scored 39 goals his rookie season and became the first 18-year-old to play in the NHL all-star game.

He was so amazing at such a young age, this leads to him breaking many previously held records. To no one’s surprise, he was on the all-rookie team in 84. At the young age of 20, he was appointed the Captain of the Red Wings. This would make him the youngest captain in Detroit history.

Early Years
Steve Yzerman spent many years putting up great numbers, but could never quite win that championship. He scored his career-high 50th goal in 1998, but he couldn’t add to his totals that year because he suffered a major injury that made him miss the rest of the season. He came back with a vengeance the very next year and beat his career-high by 15 goals. He ended the season with 65 goals and 90 assists.

Though he had a spectacular career stats-wise, he just wasn’t able to lead his team to a championship, and that lead people to question his leadership abilities. However, after several years in the league, he finally took his team to the Stanley Cup Finals in 1995. Keep in mind this is almost 30 years since the Red Wings had last been to the Stanley Cup Finals and 12 years after Steve Yzerman first joined the NHL. Sadly they still weren’t able to beat the NJ Devils.

The Stanley Cup
In 1997, he was finally able to make all those who doubted him quiet down. That year they dominated the regular season, the playoffs, and swept the Philadelphia Flyers in the finals. Who wouldn’t want a Steve Yzerman Jersey. He was the man that led the Detroit Red Wings to their first Stanley Cup win for the first time in 42 years.

After a feat like that, you’d think “well the only way to go from there is down, right”? Wrong. He did the exact same thing the next year. In 98 Steve Yzerman led the Red Wings right back to the finals and beat the Washington Capitals. In 1999 he became only the 11th person to score 600 goals in the NHL. Of course, after such a spectacular career he was elected to the NHL Hall of Fame in 2008.

The best place to get a Steve Yzerman jersey, or any professional throwback jersey for that matter, would be from customthrowbackjerseys.com. They have authentic jerseys for sale that look exactly how you remember them 20-30 years ago. You can get Hall of Famer Steve Yzerman’s jersey today from Custom Throwback Jerseys.

Airsoft players can customize their airsoft guns with some personal, colorful touches and skins before they bring them on the airsoft field, but if...
Read more
Sports

Baseball Clothing to Wear to and From Games

When it comes to sports, and the fans of sports, it’s either go big or go home. When it also comes to the sports...
Read more
Business

Find the Right Ping Golf Driver Shafts for Your Next Game

Now that we are in the full swing of summer, it’s now the best time to start going out and doing your favorite hobbies...
Read more